Death did not end his service to the British Empire

Beneath Windsor Castle, a shadow network of immortals keeps the British Empire safe. Army captain Lucas Fitzrobbins becomes one of them when the cure for his mortal wound turns out to be a vampirism potion. He is abruptly inducted into the secret St. George Protector Society…and it’s not long before the Society’s newest recruit discovers it has dark mysteries as well…

Marked as a target

Hampering Lucas’s efforts to adjust to his after-life is An Tighearn operative Nellie Clifton, a beautiful and enigmatic assassin, who has marked Lucas as her latest quarry. But then…

Secrets are threatened to be revealed

A brutal killer stalks the seamy underside of London. Protectors and assassins alike must leave the shadows to find the fiend before their existence is revealed to the world. Tasked with the job of tracking down the murderer, Lucas discovers that the crazed butcher may have connections that go to the heart of the British Empire. One thing is certain:

The Queen must never know! 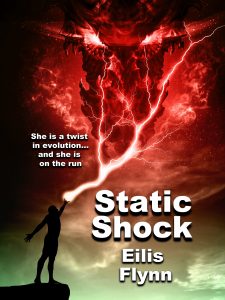 Can you live without your computer? Can you wear a watch? Do you know anyone who can’t?

In a time not long from now, there are people whose life paths are determined by such simple details. Legally recognized as electromagnetics, or “Readers”, they are a twist in evolution, an anomaly in a society that has become technologically dependent. Considered second-class citizens because of their heightened electromagnetic fields, Readers can’t wear watches, get too close to a TV, or even drive for fear they will shut down the car’s electrical system. Computers become worthless doorstops quickly around Readers. Career prospects are limited.

Reader Jeanne Muir decides to expand her horizons when she’s unexpectedly offered a new job opportunity. But she hasn’t been told that her job description includes being framed for a crime she didn’t commit. Because Readers are not held in high esteem, Jeanne’s an easy scapegoat, and law enforcement definitely is not on her side. Knowing she was set up and the odds are against her, Jeanne can’t let herself be taken in-and risks asking mysterious, sexy Ran Owata, a fellow Reader who is no longer accepted among their kind, for help. The problem is: Can she trust him? Does she have a choice?

THE RIDDLE OF RYU

The Stars Have Always Been There For Her…

For lonely UFO hunter Ginevra Kincaid, the stars have always been her friends. She’s always been sure she would one day have a close encounter of the third kind—until one strange night, she arrives at the site of a meteor crash and meets…an alien? He might be, or maybe not…he can’t remember anything about himself, except his name: Ryu. But he’s being pursued by men in black, who claim he’s not who she thinks he is.

Can Ryu and Ginevra escape the men in black, and recover Ryu’s memories as well? Go to Smashwords.com, Amazon.com, or BN.com to find out more about this e-novella!

He had to discover the truth behind the lies

When Secret Sciences Police officer Daegon Bosaru hears rumors about the role that his dying father, the former Neotian ambassador to the Amalgamation, played in the Neotian civil war, he has to find out the truth behind the lies. To discover the truth, Daegon must travel to the new home world of his clan — where he encounters a mysterious, passionate woman he has been seeing in his dreams for most of his life. She has information he needs — but she disappears whenever he gets close to her.

She was a woman he had seen almost every night, but never met.

What does the mysterious woman know? And what do the accusations against his father have to do with all this? Bosaru discovers that Verot Barus Kurog, the crazed ex-dictator who led the home world into a civil war, is still alive, and has plans to rise to glory again, no matter how many more people have to die for it to happen — and the doomsday device that destroyed Neotia Prime is still within his grasp.

Why has she been in his dreams for the past twenty years?

Bosaru must track down the mad ex-dictator — but first, he must find out what the woman of mystery knows.

There’s more going on than meets the eye.

If you had the power to save the world, what would make you give it up?

Trained by her parents to use her abilities to fight criminals, Sonya Penn gave it all up after her parents were killed by their archenemy, Gentlemen Geoffrey, turning away from what would have been her life as a superheroine.

And yet, when she finds herself drawn to scientist John Arlen, his thirst for revenge against the criminal who murdered his father forces her to confront her choices. She could let herself fall in love with this man, who has secrets he seems unwilling to reveal to her. Or she could finally take up the mission her parents intended her to pursue… even if it means his death or hers.

They are meant for each other, but they only have one chance a year to find each other. Have you heard of the ancient Japanese legend of Tanabata? Gaze up at the evening sky, and if you’re lucky, you’ll see the Weaver Princess and the Cowherder meeting after spending an entire year apart. They are reunited once more on the wings of their helpers, the star ravens. Hope for good weather, because if rain or fog prevents them from finding each other, the star lovers must wait another year.

The lovers look for each other in every generation. This time, Kristin Olafsson and Dare Borodin must struggle against the protestations of their families, their loved ones and even themselves to reach each other.

Sometimes when the stars shift in the sky, the lovers are a little farther apart, and they struggle to reach each other. And reach each other they must, for unless they do so, eventually, the stars will move away from each other, never to meet again.

And so each year, they must try.

Have you ever had a dream so vivid you didn’t know if you were awake or asleep?

Terminally ill Cat Deveney wakes up after an earthquake in a place and time she does not recognize. Is she dreaming? She becomes certain of it when told she is the answer to a prophecy, the “Sleeper” who will end a long-running war and halt waterfire — a devastating weather phenomenon that threatens to level the land. But then she meets a man who must guide her through the war-torn countryside, an honorable man who is the very image of her unfaithful boyfriend, and she begins to wonder if she is dreaming.

Strian of Kurit has been given the task of delivering this mysterious woman to the ritual grounds. Is she really the Sleeper as the legends foretell, or is she a spy from the enemy, sent to mislead and betray? Amid the battles and his own doubts, Strian finds himself drawn to the puzzling stranger, and despite his misgivings, starts to believe…

By Eilis Flynn No passion in the world is equal to the passion to alter someone else's draft.--HG … END_OF_DOCUMENT_TOKEN_TO_BE_REPLACED

Hanging in There: The Art of Persistence

by Eilis Flynn  The recent death of actor Heath Ledger prompted discussion on a number of loops, … END_OF_DOCUMENT_TOKEN_TO_BE_REPLACED

When It’s Not The Offer You Want

By Eilis Flynn On this side of the equator, in our neck of the woods, July means summer. In the US … END_OF_DOCUMENT_TOKEN_TO_BE_REPLACED

By Eilis Flynn When Seattle author Theresa Meyers got The Call from Triskelion, she was understandably … END_OF_DOCUMENT_TOKEN_TO_BE_REPLACED

Where We Get Our Ideas

By Eilis Flynn In honor of April Fools’ Day, let’s look at that question each and every one of … END_OF_DOCUMENT_TOKEN_TO_BE_REPLACED

Saints Of All Cultures

By Eilis Flynn March may be best-known for St. Patrick and his special day and February for St. Valentine … END_OF_DOCUMENT_TOKEN_TO_BE_REPLACED

By Eilis Flynn Literary couples. What could be more appropriate in honor of Valentine's Day, for Romance … END_OF_DOCUMENT_TOKEN_TO_BE_REPLACED

By Eilis Flynn Time, not space, is the final frontier if many of us have any say about it. Time is … END_OF_DOCUMENT_TOKEN_TO_BE_REPLACED

By Eilis Flynn The summer solstice transcends culture and religion, known under many different names, … END_OF_DOCUMENT_TOKEN_TO_BE_REPLACED

By Eilis Flynn We had joy, we had fun … sorry. It’s a riddle, really: It’s all around us and … END_OF_DOCUMENT_TOKEN_TO_BE_REPLACED

By Eilis Flynn By now, the calls have gone out for the Rita and the Golden Heart contests. Congratulations  … END_OF_DOCUMENT_TOKEN_TO_BE_REPLACED

By Eilis Flynn Praise is always wonderful, censure not so much. Critiques are a little of both, or … END_OF_DOCUMENT_TOKEN_TO_BE_REPLACED

Handling The Sale – Without Guilt

By Eilis Flynn At long last, it’s happened! Dancing up and down with joy, startling the kids and … END_OF_DOCUMENT_TOKEN_TO_BE_REPLACED

Now, I’m not much of a hoaxer myself, but I enjoy April Fool’s Day. The day is rife with possibility, … END_OF_DOCUMENT_TOKEN_TO_BE_REPLACED

Writing implements — what could be more basic? We’re here because we have stories to tell, stories … END_OF_DOCUMENT_TOKEN_TO_BE_REPLACED

The World's Foremost Military Historians Imagine What Might Have Been Robert Cowley, Editor GP Putnam's … END_OF_DOCUMENT_TOKEN_TO_BE_REPLACED

The Issue Of Ideas

Say that you’ve plumb run out of ideas. There ain’t nuthin’ there. The well is dry, the riverbed … END_OF_DOCUMENT_TOKEN_TO_BE_REPLACED

Okay, let's start it simple. (I'm not a cruel drill sergeant. If you want cruelty, try my brother. But … END_OF_DOCUMENT_TOKEN_TO_BE_REPLACED

Spring Festivals All Over

Let’s look at spring, which is celebrated by every culture and everyone (especially after a long, hard … END_OF_DOCUMENT_TOKEN_TO_BE_REPLACED

Published or unpublished, sooner or later, you face rejection in one form of another—whether your publisher … END_OF_DOCUMENT_TOKEN_TO_BE_REPLACED

May Mums: Of Spring Flowers And Mothers

What says spring and the merry month of May more than flowers? The lure of the blooming world is enough … END_OF_DOCUMENT_TOKEN_TO_BE_REPLACED

In Search Of…The World Almanac and Book of Facts

In Search Of…The New Book of Goddesses and Heroines

In Search Of…The Book of Guinevere: Legendary Queen of Camelot